Do what you love. Our Chief Fun Officer helped us learn to live by that motto. When we hit the road for our travels with Jerry after he lost a leg to cancer, this really began to sink in. About a third of the way into our toad trip, we encountered the gun dogs from HiFive Kennels. They were participating in field trials going on at a campground we were staying at in upper Michigan. It didn’t stay quiet for long. Scroll down for original video from that 2007visit. Or, read on for photos with a few excerpts…

Michigan had enough pretty scenery to keep them happy for a while. One evening while they enjoyed the peace and quiet of a remote forest campground, a man driving an unusual truck showed up. The truck bed had a dozen square steel boxes that resembled small jail cells. When he turned the engine off, a loud chorus of barking dogs pierced the air.
— Be More Dog, Chapter 12: Crossing the Mississippi

During our stay at House Lake State Forest Campground, Rene interviewed HiFive founder and trainer Bruce Minard. Wew were still in the mode of figuring our what we would do next in life. And we interviewed a number of small business owners around the country who seemed to be following their passion.

The excitement escalated Jerry into a frenzy. All the hunting dogs lunged to the ends of their tethers when their new neighbor approached. Jerry was equally curious. 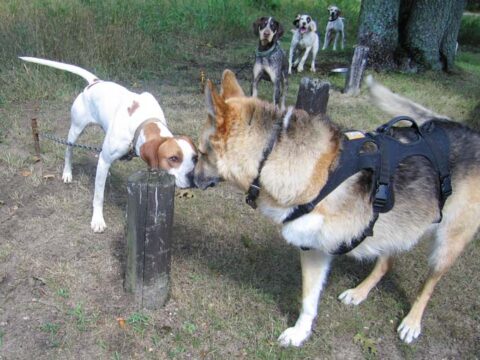 Rene provided complete details about our talk with Bruce in her 2007 Live Work Dream post titled, “Do What You Love, Rewards Will Follow.” And, the scene from House Lake was memorable enough to make it into our book, Be More Dog: Learning to Live in the Now. Which makes sense, considering it was all about dogs. Lots of dogs.

At least a half-dozen similar trucks arrived over the next hour. Each driver freed his own captives until the entire campground was filled with dozens of barking German Shorthaired Pointers. Jerry jumped up on the couch and peered out the window as the excited howls from all the dogs grew louder. 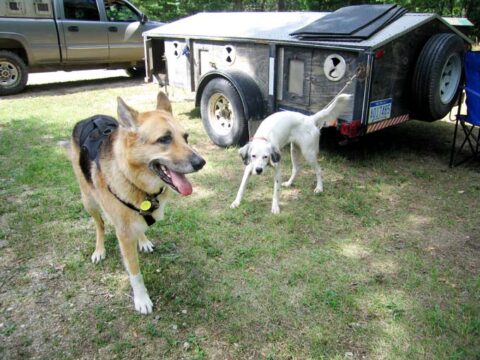 Do What You Love – We Love Dogs

The scene we describe was also all about our own quest to do what you love. And how we learned that Bruce was already doing just that.

“How long have you done this?” Rene became immediately interested in the man’s business since it was all about dogs.

“Ten years so far!” The trainer explained that he used to be a drafting and design engineer, but when his job got outsourced in 2002, he decided to do what he loved most: train hunting dogs. “Now I get paid to hunt!”

Since our first workamping job at an animal rescue, we had considered creating various new careers for ourselves which had something to do with dogs. We knew we could do what you love, and love what we did, if it involved dogs.

“So, you get to play with dogs all day? Cool!” Rene became more curious about his story, and her whole opinion of hunting with dogs changed in that instant…The idea that this man worked with them every day sounded like a dream – to her, and for the lucky dogs. Operating a kennel seemed like a fun way to make a living, maybe even something they should add to their list of potential next business ideas. Maybe.

A couple months later, in upstate New York, we even toured a boarding kennel for sale. But Bruce gave us a good reality check about working with this many dogs.

“Well, it’s not all play or fun.” The trainer willingly participated in the impromptu interview. “I mean it mostly is, but there’s a lot of maintenance and cleanup most people don’t think about. I have lots of dirty work. Horse and cow poop are fine and dandy, but there’s just no glamorizing dog crap!” The three of them laughed over that reality and then talked more about how their lives were all about the dogs.

Once Jerry helped us discover our purpose with the work we do at Tripawds, our life certainly became all about the dogs. Three legged dogs, that is, and cats. But we don’t have all that dog poop to deal with!

I finally found some of the old original video footage from Jerry’s visit to House Lake!

Stay tuned for more photos and videos from scenes we wrote about in Be More Dog: Learning to Live in the Now. And, for the complete story about our travels with Jerry and how we learned to do what you love, curl up with your favorite format now.

1 thought on “Do What You Love to Be More Dog”