The Introduction to Be More Dog: Learning to Live in the Now opens with a scene of authors Rene and Jim being questioned by a PBS producer interviewing them for her documentary, Why We Love Cats and Dogs. Jim was a seasoned marketing professional, familiar with video production, but the recent diagnosis of Jerry’s lung metastasis and the filming at his oncology visit had Jim overwhelmed and nervous when he was asked to tell their story on camera.

“This is Jerry, the Tripawds spokesdog! When he lost a leg to cancer, we sold everything and bought an RV to travel the country together. Now he’s got followers all over the world…

It wasn’t exactly what the New York producer wanted to hear.

“Wait. Cut.” It sounded like a commercial. The Emmy award-winning filmmaker and director of a new Nature episode for PBS didn’t drag her crew across the country and up into the mountains outside Santa Fe to hear this. She needed some honest, heart-wrenching footage of the crazy couple who went to extreme lengths for their terminally ill dog.

She decided to have Rene kick off the interview…

Rene began, “Jerry’s been with us through the most important part of our lives…” The director kept the cameras rolling and started nodding with approval about what she was now hearing. What she was hearing was more authentic. It came from the heart. And that made for great TV.

Jerry lay comfortably soaking up the New Mexico sun, and his newfound stardom, ignoring the big camera and boom mic overhead. Rene went on to explain how they adopted Jerry from a local animal shelter as a puppy. And Jim lightened up to explain their many hikes, and Jerry’s role as the Chief Fun Officer of their home based business. 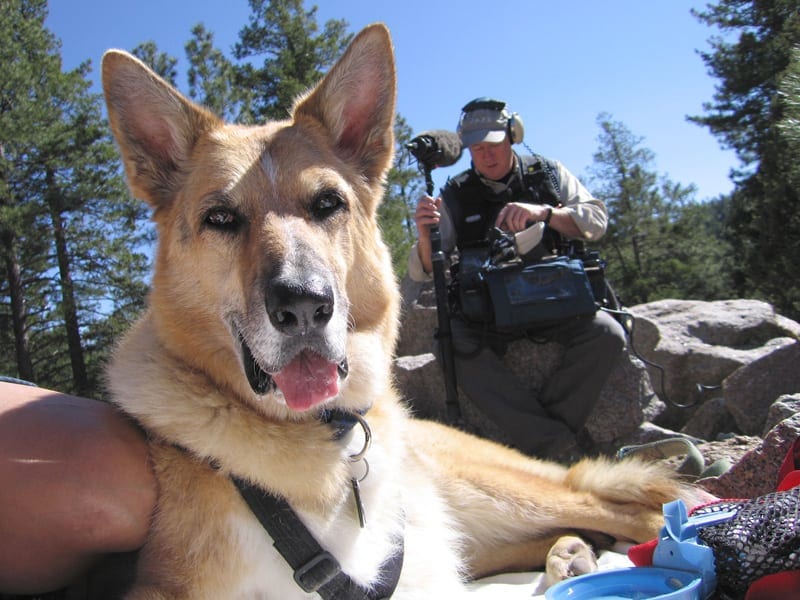 The producer was pleased. She was now getting good footage she could work with. Hoping for even more juicy material to illuminate the dynamic human-pet relationship she was trying to portray, she encouraged Rene to go on.

Rene tried to explain just how much Jerry was part of their family, even though she noted, “He’s not a kid. He’s not human. But he means so much to us…”

Rene looked towards the camera. “How far do you go for a dog?”

The producer took off her sunglasses and signaled to her crew that they just got exactly what she was looking for.

“Cut.” She had given the director precisely what she wanted to hear, and the filmmaker smiled. It was an ideal ending for one of the segments she crafted about Jerry and his people for Why We Love Cats and Dogs, which first aired on PBS in 2009.

Why We Love Cats and Dogs Interview Segment

The PBS “Nature” episode featuring Rene and Jim telling their story that would one day become their book Be More Dog, delves deep into the human-animal bond that people develop with their cats and dogs. The documentary profiles pet parents and experts, including an animal behaviorist and a gentleman who claims his cat saved his life. Jim and Rene are the crazy dog people.

The full episode can no longer be viewed on the PBS website, but this segment featuring the interview described above is available on their Youtube channel. You can also get Why We Love Cats and Dogs on  DVD to enjoy this excellent documentary sure to please any animal lover.

Of course, appearing on PBS was a big deal for Jim and Rene. They published various Nature episode posts on Tripawds at the time. It was Jerry’s appearance, however, that was the bigger deal for them. They were honored to share his  story with the world. Unfortunately – Spoiler Alert! – Jerry passed before his big debut, when Jim and Rene appeared at the TCA Press Conference to announce Why We Love Cats and Dogs as part of the 2009 PBS season line-up.

The couple was honored to field questions about their role in the show. One reporter even asked if the three-legged stuffed dog sitting on Rene’s lap contained Jerry’s ashes. Read Be More Dog to discover the significant role “Hoppy” plays throughout the story.

Jerry was not with them when Jim and Rene watched the episode on the night it aired. With no TV, they sat alone in a rec room at an RV park they found with a television for guests. They monitored the PBS website as comments rolled in reacting to the show.

Then the credits rolled. Reality hit. Jerry was not sitting at their side anymore. But after witnessing how the audience reacted to the show, Jim and Rene felt reassured that his legacy would continue. Viewers left so many heartfelt, positive comments on the PBS website that it crashed within an hour of airtime.

Excerpts from Be More Dog: Learning  to Live in the Now 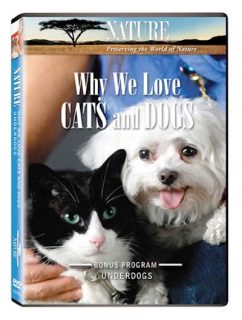 The “Nature” website does still have an in-depth PBS interview with Rene and Jim. The couple remains touched by the more than 130 comments from viewers commending them, applauding Jerry, and sharing their own touching animal love stories.

Watch Why We Love Cats and Dogs on DVD

Get the whole story in Be More Dog: Learning to Live in the Now