Of all the informative interviews and Tripawds movies we’ve posted, it is Jerry’s Extra Long Tongue video that has received the most views. We wrote about this in Chapter 11 of Be More Dog: Learning to Live in the Now. And years later, that silly little video now has 1.4+ Million views!

No, this photo of Jerry isn’t from his extra long tongue video. That was more than a year later, while visiting the Grand Tetons near Yellowstone during what would be his final days. No need to be sad. Look at how happy he is! That’s why we say, Be More Dog.

Rene shot the video I’m referring to during our visit to Bear’s Lodge, aka: Devils Tower. We’ll have to share that excerpt soon.

Grass and shade blanketed the campground, making it a perfect setting for some low-flung Frisbee tossing. Jerry’s eyes lit up when he saw Jim toss his favorite floppy flying disc to him. Back and forth, again and again, he went after the flying saucer prize.
– Be More Dog, Chapter 11: Cool It

For the record, this was long before we came to realize how detrimental such high impact activity can be for Tripawds. Especially for front-leggers, the repetitive pouncing on that one remaining forelimb can cause some serious damage over time. But back then, we believed it was another opportunity to share how awesome our Chief Fun Officer was.

Rene ran alongside Jerry with the camera to capture his mid-air retrievals. It didn’t take long to make Jerry happy, and within minutes, they plopped down under a tree to rest. Jerry eagerly slopped up all the water from the portable water dish on Jim’s belt. Most of it spilled out his jowls and onto the grass, but he was satisfied and sat happily panting as his thick, long tongue flopped out one side of his mouth.

Why is Jerry’s Extra Long Tongue video still our most popular Tripawds movie? We blame it on the immaturity of many viewers who misinterpret the video thumbnail…

They chuckled at the bobbing organ so long it practically swept the grass under Jerry’s paws. While he rested, Rene zoomed the camera lens in on the bouncing tongue.

Take a look at the thumbnail image Youtube originally selected for Jerry’s Extra Long Tongue video <sigh>. Many of the comments we’ve received on the video over the years are equally ridiculous. 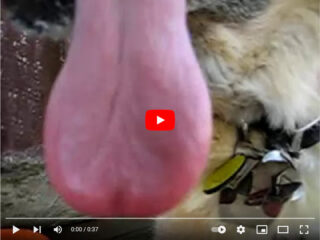 I used to work hard adding titles and music to Jerry’s videos. I did my best to keep people engaged, while showing how our three-legged dog loving life on three legs. And I’m still pretty proud of many of those longer videos. But this was the first to receive more than one million views.

In those days, Jim would spend hours making videos, but not this one. He made a quick clip showing just a few seconds of a close-up shot of Jerry’s extra long tongue. Little did he know that the silly snippet would be their first video to receive more than one million views. Why? Because at first glance, the movie’s thumbnail of Jerry’s thick, pink tongue resembles a certain private part of the male anatomy.

Stay tuned for details and excerpts from the spiritual moment we had prior to our play date that resulted in Jerry’s Extra Long Tongue video. Or, get your favorite format of Be More Dog and read all about it!

Jerry had such an extra long tongue after playing at Devil’s Tower for a reason. It was hot, and he was exhausted. We know much better now to never let Tripawds play Frisbee! You can see why in the video below from the good time we had playing.

Sure, it was fun. And yes, it’s fun to watch. But it does more harm than good. Rehab therapists describe this as “explosive activity”. There are many other fun ways to exercise three legged dogs. Find a rehab therapist near you, and the Tripawds Foundation can pay for your first consultation!