Having just left Vickers Ranch, I’m taken back to that day we drove away after our first summer workamping there. I’ll never forget how I sped up and looked back at the ranch house as we hit the road after being stationary for so long. We were on our way to meet three legged sled dog Calpurnia. But I had other things on my mind.

As we drove away this year, I looked over my shoulder and back at the ranch house, remembering well that scene we wrote ending the “Ranch Life” chapter of Be More Dog: Learning to Live in the Now.

It was time to go. They piled into the Dodge, and as Jim pulled away from the red-roofed ranch house, he was glad to feel the wheels rolling again. From the rearview mirror, he studied Jerry looking out the window as they drove past the fishing pond and his favorite swimming spot. Then he pointed the truck north toward Denver and sped up.
– Be More Dog, Final paragraph of Chapter 21: Ranch Life

Meeting the three legged sled dog Calpurnia was an honor and inspiration. The visit breathed new life into Jerry, who had started to decline during our final days on the ranch. We were on our way to meet with his oncologist again. Seeing Jerry run with the Odaroloc Sled Dogs made us forget about the cancer taking over his body. He had clearly forgotten all about it already.

We had met up with the team and made new friends during our first visit on Kenosha Pass before we went to the ranch that spring. For that first meeting, Jerry was still strong enough to to take a long walk with his new girlfriend – the three legged sled dog Calpurnia. You can see how well they hit it off in this fun video from our first encounter.

Our video technology has certainly improved since 2008, but this still makes me smile. Our return to Kenosha Pass that September was a bit more somber than our first visit. But everyone understood our situation.

Be More Dog Excerpts About Calpurnia

Their friends were the only other visitors, a rag-tag team of retired Iditarod racers and grey-muzzled huskies. They yipped and howled in unison as soon as they spotted Jerry. The sound of Calpurnia’s bark floated above the others, indicating she was especially excited to see her old friend.

No, we didn’t let Jerry run with the team on their training run. It was the “gimpy dogs” team, with a one eyed dog, a one eared dog, and of course Calpurnia the three legged sled dog in the lead – from her seat on the ATV. And they only went about a hundred yards and back. But we knew even that would be too much for Jerry, in his condition.

The carefully orchestrated chaos of excited sled dogs was primed for the run. When the last husky was clipped into the line, TC lifted Calpurnia away from Jerry and gently placed her in the ATV’s rear gear box. The old gal’s missing limb had caught up with her too, and she now led the pack from her cushioned chariot.

We did, however, set up the shot for another favorite photo opportunity. And, of course, we made another video of all the three legged sled dog action.

Jerry did run around, exploring all the dog butts, and making the most of every moment. Just another great day, loving life on three legs.

Before the team sped off, Rene asked TC about a veterinarian she knew near Yellowstone. That’s where we were headed after Jerry’s oncology visit in Denver. Even though Jerry was happy hopping around, the moment was a major reality check.

Tears pooled in Rene’s downcast eyes. It was time to come clean about Jerry’s condition. The inevitable end was just around the bend. Talking about his decline with anyone but Jim made it official. 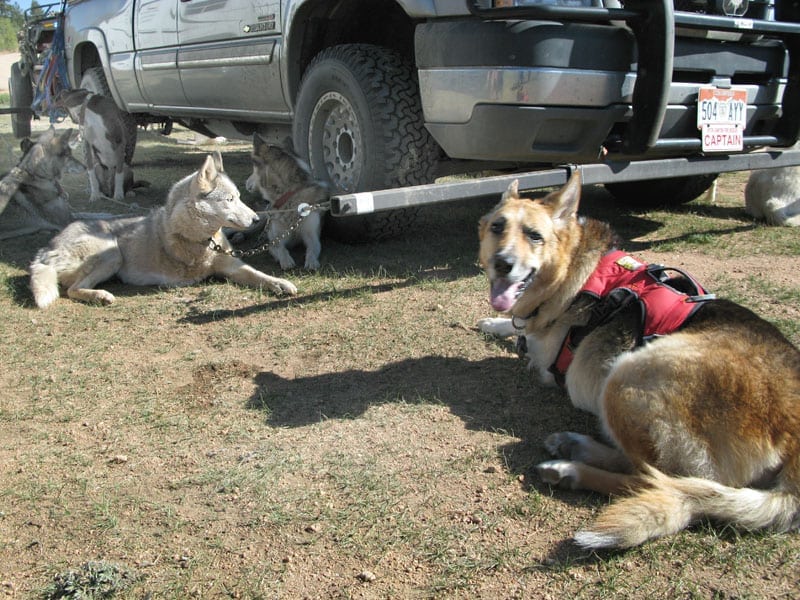 Jerry paid no attention to the discussion. He was more interested in what his friend was doing so far from his reach. Rene lifted her glasses and wiped away tears with the back of her sleeve as Calpurnia’s team sped away on the dusty trail.

Learn more about three legged sled dog Calpurnia in our various Tripawds blog posts about her. Find out what happened on those visits to Kenosha Pass – and that veterinarian – in Be More Dog: Learning to Live in the Now.