What are awarepreneurs? As defined on the Awarepreneurs website, they operate a conscious business, with social impact, while practicing awareness. This defines Tripawds founders and Be More Dog authors Rene Agredano and Jim Nelson. That is why Awarepreneurs podcast host Paul Zelizer welcomed Jim on to episode #169 for an in depth discussion about Growing the Largest Amputee Pet Support Network. 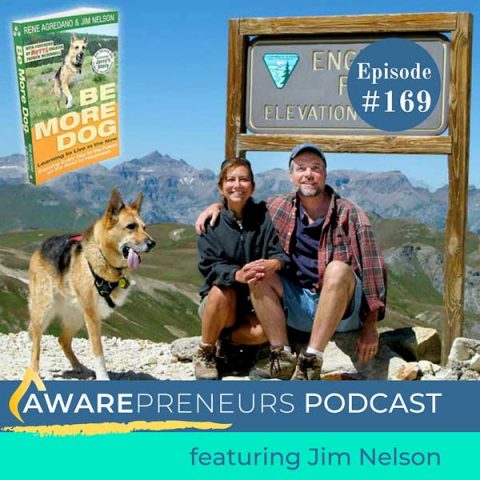 Rene and Jim weren’t even aware there was such a word for the good work they’ve been doing at Tripawds for 13+ years, until the discovered the Awarepreneurs community and podcast. Listen to his interview with Paul below, or read the full transcript here.

Paul summarizes the show with this introduction about Jim, the Tripawds community, and their book Be More Dog: Learning to Live in the Now…

After time in Silicon Valley during the dot com heyday and then growing a home-based graphic shop and marketing firm, Jim and his wife Renee had their life radically changed with their dog, Jerry, became an amputee. They bought an RV, hit the road and launched Tripawds. Today it’s the largest online support community for amputee pets and their owners with over 15,000 members.
~ Paul Zelizer

Paul kicked off the show by asking Jim about the Be More Dog foreword by Patrick McDonnell. Patrick sets the scene for the book by quoting Winnie The Pooh creator A.A. Milne.

“Some people talk to animals. Not many listen though. That’s the problem.”
~ A.A. Milne, Winnie-the-Pooh

Rene Agredano and Jim Nelson listened. They listened with all their
hearts.
—Patrick McDonnell

Jim proceeds to describe how listening is one of the most important things we can do to connect with others. He explains how he “talked” to their Chief Fun Officer Jerry – by listening. The conversation takes many turns from there, yet always returning to awareness, presence, and living in the Now.