Sitting inside the mobile Tripawds HQ on a rainy morning, I’m reminded of the day we met Tripawd Irish Wolfhound Finnegan. This gentle giant was one of the first three-legged dogs Jerry met on the road. Nearly 15 years later, Finnegan still remains one of the largest giant breed Tripawds we have ever met.

That meeting of Two Triumphant Tripawds was so long ago, and on the other side of the country. But it is still a memorable early highlight from our cross country road trip with Jerry. Finnegan was a Tripawd Irish Wolfhound who dwarfed our three legged Chief Fun Officer. His mom Andrea contacted us in May, 2007. That was about six months after Jerry’s amputation, but still abut a month before we even left Eureka, California. The epic meeting took place about four months later in Eerie, Pennsylvania. And that was two months before Jerry’ one-year ampuversary. Despite doctor’s warnings, he was still loving life on three legs. And we were telling the world all about it in his voice during those early days of what became the Tripawds News blog.

To prove Jerry wasn’t an anomaly, they shared stories about other amazing dogs. One of the first was Finnegan, a Tripawd Irish Wolfhound in Pennsylvania.
— Be More Dog, Chapter 13: Tripawds Coast to Coast

That video of Moose, the three-legged Great Dane may have inspired us to proceed with Jerry’s amputation. But we had never met a three-legged giant breed dog before – let alone a Tripawd Irish Wolfhound. Loing the same leg as Jerry did, also to osteosarcoma, Finnegan was a huge inspiration for us. Literally…

As large and lovable as a small pony, Finnegan proved that canine osteosarcoma doesn’t always play by the rules. At six years old, and twenty-four months after being told he wouldn’t last more than six, the giant Tripawd showed the world that all dogs—of any size—can enjoy life as an amputee.

Of course, we documented the event with another video for the Tripawds Youtube channel.

We were so excited, and inspired by the sight of Finnegan, it was hard to hide our feelings.

“Oh, Finnegan, let me touch you!” Rene didn’t need to bend down to plant a kiss on the tall dog’s forehead. Finnegan’s wooly fur was softer than it looked, and he stayed calm and patient while she smothered him with affection. The gentle giant didn’t care about her, though, his eyes were fixed on Jerry.

At the sight of this giant Tripawd Irish Wolfhound, however, we were also a bit intimidated. I admit, I was a bot cautious about the encounter.

We clearly had nothing to worry about. These two Tripawds hit it off, and became instant friends. It was the first af a few six legged dog parties to come on our travels with Jerry.

Dog encounters can go either way, but Finnegan and Jerry were a good match. No growling, no barking, no drama. They simply sniffed each other up and down to decode one another with their powerful noses. The humans watched closely, lost in their own interpretation of the encounter. Andrea peeked out from underneath the hood of her jacket and asked what they all had been wondering. “Do you think they know they’re both different?” 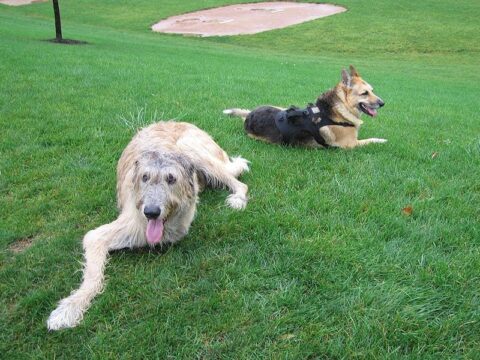 Lessons From a Tripawd Irish Wolfhound

I remember this day like it was yesterday. But it seems so long ago. I guess going on 15 years now, it was. June of the following year, Finnegan reached another milestone. That Tripawd Irish Wolfhound celebrated his eighth birthday, and two years on three legs. Not bad considering the average life expectancy of Wolfhounds 6.2 years. In August of 2008, Finnegan left this earthly realm to wait for Jerry at the Rainbow Bridge.

…the grateful humans could see that there was no fear, worry, or doubt showing on their dogs’ expressions. Forget amputation, chemotherapy, and supplements. These dogs just did what dogs do best: live life to the fullest and send happy energy into an uncertain world. 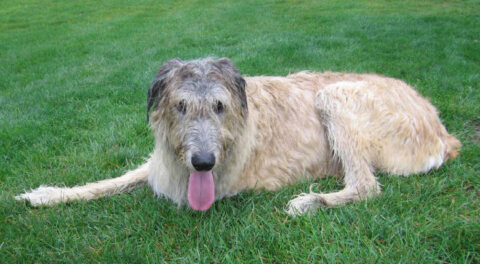 The greatest lesson we learned from Tripawd Irish Wolfhound Finnegan that day, is the same one Jerry and every three-legged dog has ever taught us. And that is, to Be More Dog. 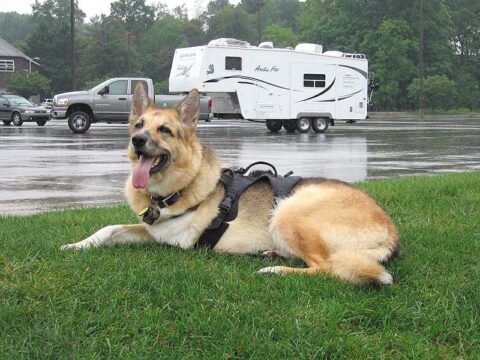 Sending happy energy into an uncertain world…that pretty much sums up our purpose for keeping the Tripawds Community online, and writing our book, Be More Dog: Learning to live in the Now.