Being back at Vickers Ranch brings back bittersweet memories of our first summer here in 2008. That was our last summer together with Jerry. And we couldn’t have spent those precious few months in a more magical place. The ranch plays a special role in Be More Dog: Learning to Live in the Now. As do the ranch dogs who roamed free. Our Chief Fun Officer Jerry became an honorary ranch dog. But he preferred hanging out with old Boone. Those two certainly knew how to be more dog.

We dedicate one full chapter to providing details of Jerry’s adventures – and pitfalls – on the ranch. Adequately titled, Ranch Life, the chapter highlights the good times we shared in the mountains and many lakes. We describe how we first noticed Jerry’s decline while the cancer finally caught up with him. And we share how we noticed Jerry and Boone interacting so peacefully – perfect for the sweet souls they both were.

(Rene) immediately fell in love with Boone, the oldest of the ranch’s freeroaming herding dogs. He was such a kind-hearted old soul, and she needed a dog fix…
Boone didn’t run with the pack so much anymore, but even at nine years old, he still got around pretty good. Osteoarthritis made his gait more of a waddle, but just like old Perk Vickers, the dog took pride in his job of keeping the younger pups in check.

Jerry was a lover, not a fighter. He always got along with other dogs, even those who tried to dominate him. Or herd him…

Their spot for the summer was nestled in the woods, across the river and away from the pack of unleashed miniature collies and Shetland sheepdogs who reigned over the property…
He was good with all dogs, especially ranch dogs who tried to put him in his place the day he arrived. They yapped at him and herded at his heels, but the ever tolerant and patient Jerry brushed off their tactics. He seemed to accept their attitude, then ignored it for the rest of the summer.

Jerry spent most days in the RV while we were working. He was in no condition to keep up with us when we had no idea where we might be around the vast ranch property throughout the day. On a few special occasions, Jerry continued his role as CFO when Rene brought him to the office. Once he warded off the aggressive greeting from the pack of little barking dogs, he would find his old pall Boone.

On quiet days when Rene brought him by the office, he and old Boone would sit quietly together on the back porch, watching the young dogs run around the laundry lines. Like two elderly men getting together for coffee, they sat in silence, content enough to simply be.

Meanwhile, Back on the Ranch

Thirteen years later, we’ve returned to Vickers Ranch to enjoy another summer at our favorite ranch workamping job. We’ve come back nearly ever summer since that first summer with Jerry. Rene is still working in the office, though it’s not nearly busy as it used to be. The Vickers no longer manage cabin rentals. But Rene’s mornings are busy spent checking in riders for the trail rides, and renters picking up Jeeps.

I’ll never forget how Jerry was so good around all the horses. He never barked nor charged, unlike his Tripawds spokesdog successor Wyatt Ray. This is in fact our first time back at the ranch without a dog. 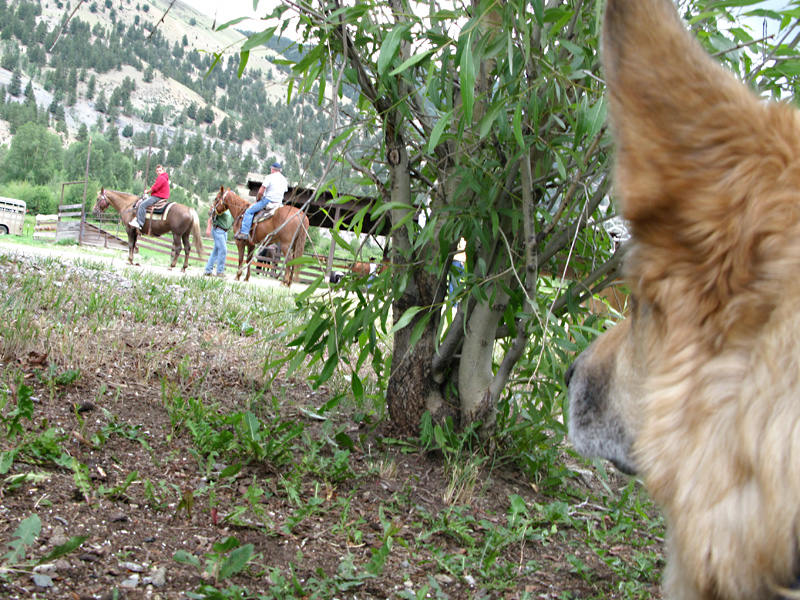 Life is certainly much easier workamping here without worrying about a dog – especially one like Wyatt. But it clearly has its drawbacks too. Rene recently wrote about the pros and cons of RVing without a dog for our Live Work Dream blog.

For more stories about Jerry on the ranch, and a Florida farm, and various other workamping jobs we had those first two years on the road, check out Be More Dog: Learning to Live in the Now – in paperback, or your favorite e-book format.